Have you ever passed a property on a rainy day and the irrigation system or sprinklers are on? Why in the world would anyone water their lawn on a rainy day? The answer is that it’s an under-managed system and it’s wasting money.
These are the top five reasons your irrigation or sprinkler system could be costing you money:
1. Overwatering
2. Watering during rainy weather
3. Inaccurate adjustments or settings
4. Unknown water flow rates or breaks, leaks in the system
5. System under management
A beautiful lawn and landscape begins with effective water management. Proper water management in the landscape will keep soil moisture at optimum levels. Saturated soils starve the roots of essential oxygen. The soil must be allowed to dry out, not to a wilt point, but enough to get air to the roots.
To promote a deep healthy root system best horticultural practices recommend deep less frequent watering. The watering frequency should be managed in response to changing weather conditions and rainfall amounts.
Additionally, many existing system have what’s called a rain sensor. These rain sensors contain small hygroscopic disks that swell up during rain fall, it then sends a signal to shut the system off. The problem with this kind of sensor is that it does not measure moisture in the soil.
To improve water conservation and system efficiency, “smart” controllers are being added to existing irrigation controls for the lawn. These systems will only run irrigation based on soil evaporation and rainfall.
The system maintains a running moisture balance to decide when watering is needed. Some homeowners have seen irrigation water savings of up to 70 percent.
Many also monitor flow rates through the pipes to alert in the event a flow has been interrupted, such as when a irrigation or fitting becomes cracked or broken. 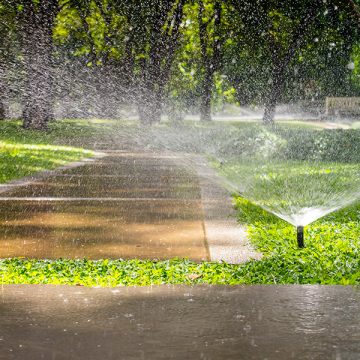